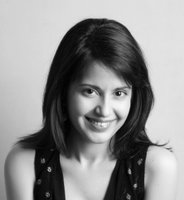 Amalia Sagona received her Doctor of Musical Arts in Piano Performance at the The Ohio State University (U.S.), under pianist Steven Glaser, while being awarded the University Fellowship and the Graduate Outstanding Achievement Award. Her DMA Document on Edvard Grieg’s works Ballade in the Form of Variations on a Norwegian Melody, Op.24 (for piano), and Old Norwegian Melody with Variations, Op.51 (for 2 pianos), was awarded the Α.Peter Costanza Distinguished Dissertation and DMA Document Award, and was also presented at the Edvard Grieg International Conference in Copenhagen (Denmark, 2011).

She completed her Master of Music in Piano Performance - under a Scholarship- at Bowling Green State University (U.S.), with renowned pianist Maxim Mogilevski. She also holds a Bachelor of Music in Piano Performance from the Department of Music Science and Art of the University of Macedonia (Greece), under pianists Lambis Vassiliadis and Vinia Tsopela, while she was awarded her Piano Diploma with 1st Prize by the Contemporary Conservatory of Thessaloniki (Greece).

She has also worked as an Official Accompanist at the Classical Singing Workshop with the internationally acclaimed tenor Zachos Terzakis (Thermo, Greece), the Cello Seminar ‘The Art of Music Interpretation’ with renowned cellist Dimitris Gouzios (Conservatory En Organis, Athens, Greece), the Brache International Music Days (Accompanist & Piano Teaching Assistant, Schleswig-Holstein, Germany), and the Vertiskos International Music Seminars (Accompanist, Greece). Moreover, she has taught piano for five years at the Agrinio Music High School in Greece, hired by the Hellenic Ministry of Education. Since 2016, she resides in Athens (Greece), where she teaches piano at the Byzantine Conservatory, the Conservatory En Organis and the Sychrono Conservatory of Athens, while she is also active as an accompanist. She has particularly collaborated with Prof. Athanasios Zervas’s saxophone students in Athens, having accompanied several graduation recitals of his students at the Athens Conservatoire, the Byzantine Conservatory and the Art Music School Fakanas, and also with several vocal students of the Panarmonio Conservatory.